How to Open a Locked Door With a Screwdriver

The simple screwdriver is one of the most versatile tools man has ever known.

It can turn and poke things like no other!

But is the screwdriver handy enough to open a door without a key? Believe it or not, it is!

In this guide, we’re going to look at six unique and fairly simple methods to unlock a door with a screwdriver, including non-destructive techniques such as lock picking and loiding.

For most of these methods, a small flathead screwdriver will work best.

How to Pick a Lock With a Screwdriver

You’ve likely seen a movie or video game where the cunning protagonist pulls out a screwdriver, sticks it into the keyway, and with nothing but a wiggle, unlocks the door.

But how realistic is this? Can you actually pick a lock with a screwdriver?

Sadly, you can not pick a lock using a single screwdriver. Screwdrivers are too large to fit into most keyways and will do a poor job manipulating the internal components of the lock.

The lock pick is used to manipulate the pins within the lock, while the turning tool is used to apply a rotational force to the lock, similar to turning a key.

While a screwdriver is pretty worthless as a lock pick, it can be used as a turning tool! This being said, you will need a screwdriver that is small enough so that you still have room to fit a lock pick into the keyway. It will also need to be a flathead profile.

Alright, so we know that we can use a screwdriver as a turning tool, but what can we use for a lock pick?

For basic locks with wide-open keyways, you may be able to use bobby pins or paperclips. To craft those tools, check out the following guides.

However, bobby pins and paperclips won’t fit into all keyways, in which case you’ll need to buy lock picks or make your own tools.

If you need to buy tools, I recommend picking up a rake type of lock pick—such as the Bogota or Snake Rake. Or if you want to just want to pick up a full lock pick set, I highly recommend the Peterson GSP Ghost set. I also have a review of this set here if you want to learn more about it.

Don’t worry, in most locations lock picking tools are not illegal to own.

Once you have a lock pick and your screwdriver, you’re ready to rock and roll.

To pick a lock with a screwdriver, follow these four steps.

Step 1: Insert your screwdriver into the bottom of the keyway and apply a very light turning force in the direction you would normally turn the key (typically clockwise).

Step 2: Insert your rake above the screwdriver and push it all the way to the back of the keyway.

Step 3: While maintaining the turning force on your screwdriver, begin to scrub the pins with your rake—just like brushing your teeth.

Step 4: Continue scrubbing while slightly adjusting the angle of your pick. After some time, all of the pins will set and the lock will open!

That’s it, you just picked a lock using a screwdriver!

Note: If the lock doesn't open within 10-15 seconds, remove your pick and release the turning force on the lock to reset the pins and attempt steps 1 - 4 again. Play around with the amount of turning force that you apply to the screwdriver—typically less force is better than more.

If you’re trying to unlock a door inside your home, you’re likely dealing with a privacy lock— those doorknobs with the tiny hole on the outside.

If your doorknob looks like the image below, then you can easily unlock it using a small screwdriver.

However, if the door doesn't look like the image above and requires a key to unlock, this method won’t work for you.

To unlock a privacy lock you’ll need a flathead screwdriver that is small enough to fit into the hole on the doorknob.

Insert your screwdriver into the hole and push forward. If your doorknob is using a push-button type privacy lock, then you should hear a loud click and the door will open. 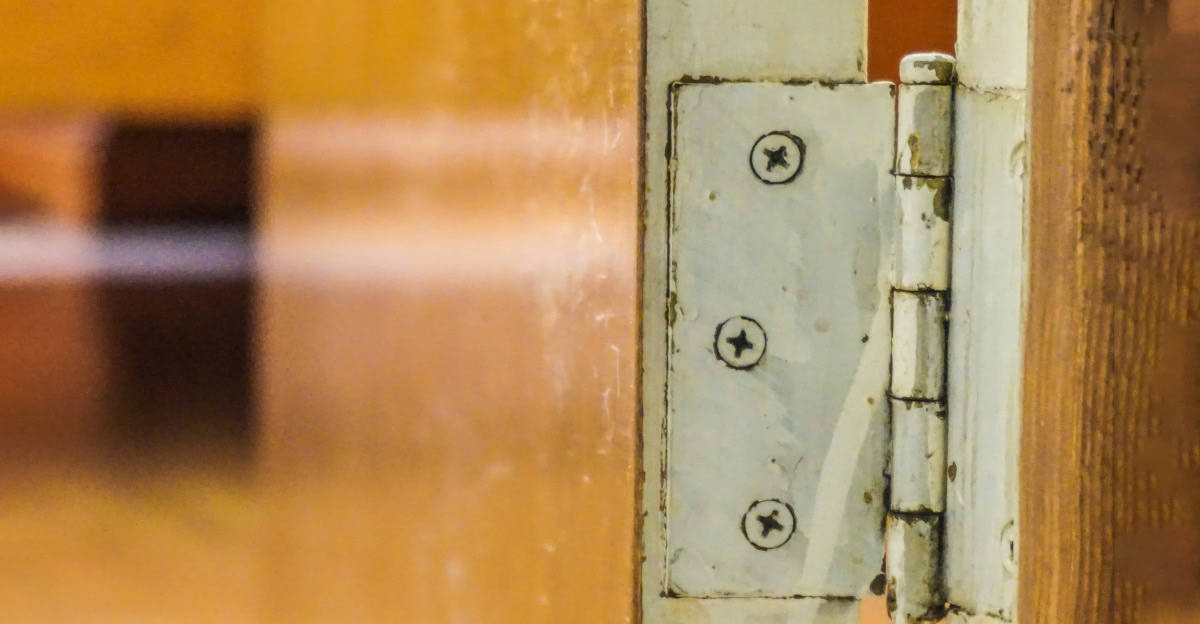 If the door swings outwards and the hinges are on your side of the door, then you are in luck.

Using your screwdriver and perhaps a hammer you can remove the hinge bolts and outright remove the door.

If you don’t have a hammer and are outside, try and find a nice rock, 2x4, or another hard object to hammer out the bolt.

Note: If your hinges are on the outside of your door for any exterior doors that you rely on for your security, you should consider reinstalling the door.

If the screws on the rosette (the fancy covering behind the doorknob) and the deadbolt on your side of the door you may be able to access the locking mechanism.

To unlock the deadbolt, remove the screws. Once removed there will be a rod sticking out. Push that rod through the door completely until it exits from the other side. Using your screwdriver, retract the bolt by turning the cam slot—usually a square hole in the center of the lock.

To unlock the doorknob, remove the screws in the rosette and then fully remove the doorknob. Once again push the rod out the other side and using your screwdriver, retract the bolt.

If you don’t see any screws on the doorknob or deadbolt, they are likely on the other side of the door.

If there is enough room (or slop) between the door and the doorframe, you may be able to use a method called loiding—also called “shimming.”

You’ll likely need a thin flathead screwdriver, however, if the gap between the door is really wide you maybe get away with something thicker.

To loid the lock with a screwdriver, push the tip of your screwdriver between the door and the doorknob until you feel the spring latch. Continue pushing to retract the bolt until the door pushes open.

For clarification check out my guide to learn more about the spring latch and other parts of a doorknob.

This method will not work with deadbolts.

Let’s say it is an emergency and you don't care about the destruction of your door, doorframe, or lock, you can always resort to destructive entry.

One method that you can use on weaker doors is to try using your screwdriver as a prybar and leverage the door open.

If you have two screwdrivers you could leverage the door away from the doorframe, creating a gap wide enough to loid the latch (previous method).

If the door is hollow and wood, you can always try poking holes in it with your screwdriver as a last-ditch effort!

For stronger doors, you can brute force your way into the locking mechanism of your doorknob and deadbolt and manually retract the bolt.

This method however will fall short to doorknobs or deadbolts with shrouded covers.

If all else fails, you may be able to kick it down.

Screwing with any locks that are currently in use can have some expensive consequences.

If you want to play it safe and it is not an emergency, consider calling a locksmith. Doing so can be significantly cheap than accidentally breaking something.

The desired takeaway from this guide isn't just how to open a lock with a screwdriver, but more so that security is never really that secure in the first place. With a little creativity and patience, you can find your way around most security with very little means to do so.

A screwdriver isn't ideal, but in many situations, it will do the trick!

I hope that this guide helped you in every way possible and if you have any suggestions to make it better, please consider reaching out!

Additionally, if you would like to learn more about lock picking and security, be sure to drop by my Academy for more free guides, as well as my lock pick shop for your first beginner lock pick set.

7 Ways to Unlock a Door Without a Key

How to Pick a Lock With a Paperclip

5 Ways to Open a Lock With a Knife

How to Pick a Lock with a Credit Card